In this instalment we’ll build on our basic understanding of CSS from previous instalment. We’ll start with some new CSS selectors, in the process, introduce two new HTML tag attributes, then we’ll move on to the CSS box model. Each HTML tag is represented in the page as a box, and all those boxes can be manipulated with CSS.

Listen Along: Chit Chat Across the Pond Episode 422

Our first naive understanding of selectors was that they are simply tag names, so, we know we can specify style definitions for emphasised text with the selector em. That’s fine assuming we always want all our emphasised text to be rendered in the same way, but what if we sometimes need to apply different styles to emphasised text?

Imagine this scenario – in your main document, you are happy to have emphasised text rendered in the default way, that is to say, in italics. You also like having block quotes rendered in italics, so you have added the style definition in your sheet:

You now include a quotation that contains emphasised text – that emphasis will vanish, because within a block quote, all text is now italic! You need to specify some additional style for emphasised text, but only within block quotes.

This is where the CSS containment selector comes into play. To specify that a style should only be applied to a tag if it is contained within another tag, the selector is simply the name of the containing tag followed by a space, followed by the contained tag. So, in our example, we could make emphasised text within block quotes dark grey with the style definition:

Note that the containment selector is not limited to one level of containment – you could style only paragraphs within list elements within ordered lists with the selector ol li p.

You can define your own class names as you wish, but, they must obey the following rules:

Adding classes to a tag will have no visible effect on the document without CSS. In effect, the attribute provides a hook to hang style information onto.

To specify a class name in a CSS selector, the syntax is the name of the class prefixed with a dot.

So, to specify that all tags with the class vip should be rendered in dark red, you could use the following style definition:

To specify a style for only a particular tag of a particular class, specify the tag name followed by a dot followed by the class name. So, for example, to make top-level headings with the class vip bright red, you could use the following style definition:

Note that there is no limit to how many classes you specify in a selector – if you only wanted to apply a style to paragraphs that specify both the classes vip and for-ref, you would use the selector p.vip.for-ref.

Finally, note that you can apply the same class name to as many tags within a document as you like.

Every HTML tag can specify an id attribute. Effectively, an ID is a name you give a tag that uniquely identifies it in the document. IDs have a number of uses, and we’ll learn about more of them as we go through this series. But for now, we’ll use IDs to target individual tags within a CSS selector. That is to say, not all instances of a given tag, but a single, specific tag.

Like a class name, IDs are names of your own invention, but they do have to adhere to certain rules:

The CSS selector for an ID is the # symbol followed by the ID. So to make any tag with the ID intro_text blue, you would use a style definition something like:

You can also combine a tag name with an ID so the style is only applied if the tag with a given ID is of a given type. For example, to make a paragraph with an ID of intro_text blue you would use a style definition something like:

Unlike with classes, IDs should be unique within an HTML document.

Selectors will get even more complex in future instalments; but for now it is important to emphasise that the three selectors we have learned about today can be combined in any arbitrary way. To apply a style only to emphasised text with a class vip within a paragraph with ID intro_text you would use the selector p#intro_text em.vip.

Now that we have learned about tag containment, classes, and IDs within CSS selectors, we need to revisit the concept of specificity.

The specificity for a given style definition consists of four numbers, and is written as s,i,c,t – where all four letters represent an integer as follows:

If we add in what we learned about specificity last time, we can now say that the specificity of style definitions that are inherited from the portent, or specified with the * selector is 0,0,0,0.

Finally – if the four-component specificity for two competing definitions is exactly the same, the rule defined the furthest down the document wins.

Within the browser, every HTML tag that makes up part of the page is defined by a rectangle. That rectangle is referred to as the tag’s box. 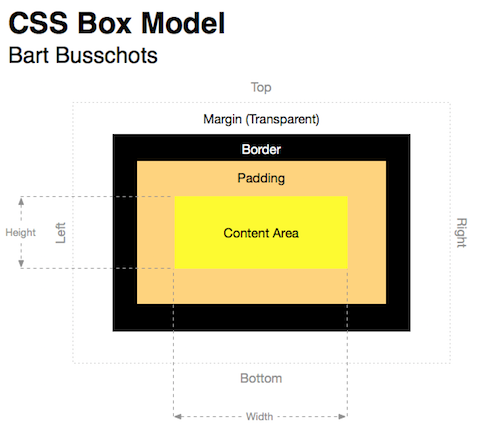 We can use CSS to style the box for any HTML tag.

When setting dimensions on boxes, we have a number of units at our disposal:

Pixels
Written as an integer number with px appended, e.g. 4px.
Percentages
A dimension can be expressed as a percentage relative to some appropriate dimension – exactly what the percentage will be relative to depends entirely on the context in which it is used. Percentages are written as a number followed by the % symbol.
Font Size Multiplier
For reasons now lost to history (though there are some plausible theories), in typography, the term em refers to the size of a font. In CSS, dimensions can be specified as being a given multiplier of the font size. This is done by specifying a number with the letters em appended to it. To specify that a dimension should be half the size of the element’s font, you would write it as 0.5em.

The margin is controlled by four CSS properties, margin-top, margin-right, margin-bottom, and margin-left. Each of these properties expects a valid positive dimension value – negative margins make no sense!

Because it’s often desirable to set all four margins at once, CSS provides the margin shorthand property. It expects either one, two, or four dimensions separated by spaces. When one dimension is specified, that dimension is applied to all four margin properties. When two dimensions are specified the first is applied to the top and bottom margins, and the second to the left and right. Finally, when four properties are provided, they are interpreted as the top, right, bottom, and left values – in that order.

An extra complication, although it does make sense, is that vertical margins which touch each other without anything in between will collapse to the largest of the two margins. This sounds counterintuitive, but it makes sense when you see it in action. For example, you may say that headers should have 20 pixels of margin top and bottom, and paragraphs should have 10 pixels of margin top and bottom. When a paragraph comes directly after a heading, you don’t want there to be a 30 pixel gap because that will look very odd indeed. What happens is that the margin will collapse to 20 pixels, because 20 is greater than 10. Horizontal margins do not collapse.

Padding is specified similar to margins, but using the four properties padding-top, padding-right, padding-bottom, and padding-left, and the shorthand property padding.

So, to set all four borders to the same, use something like:

If you want three of the borders to be the same, you can first use the border shorthand property, then one of the sides, e.g. to set all but the borders but the bottom one you could use something like:

CSS 3 finally introduced an officially supported way of rounding borders. Individual browsers had support through non-standard style properties before CSS3, but they were different in every browser. In CSS 3 we can use the border-radius property to set the radius of the rounding of the border by specifying a dimension. The border-radius property is actually a shorthand property setting the same value on all four of the following properties: border-top-left-radius, border-top-right-radius, border-bottom-right-radius & border-bottom-left-radius.

You could add a quite subtle rounding to the borders with something like:

By default, tags have transparent backgrounds, but this can be altered by CSS. Backgrounds appear behind the content region and the padding, that is to say, everything out as far as the border, but not behind the margin. That region of a box is always transparent.

The easiest element of the background to control is the colour. The property that controls the background colour is background-color, and valid values are transparent, and any valid CSS colour.

Images can also be used as backgrounds using the background-image property. The value for this property can be none, or the URL to an image.

By default, a background image is tiled across the entire box (inside its border) from top to bottom and left to right. The tiling can be controlled with the background-repeat and background-position properties.

When only repeating in one direction, or not at all, the positioning of the background image becomes important. The background-position property is quite complex, but in general, you want one of the nice simple English values like center, top left, or right. You can get the full details here.

This week’s example consists of four files – an HTML file, a CSS file, and two images used as backgrounds. You can download all four in a single ZIP file here or here on GitHub.

As usual, copy the four files into a folder called pbs7 in your web server’s document root, then browse to http://localhost/pbs7. 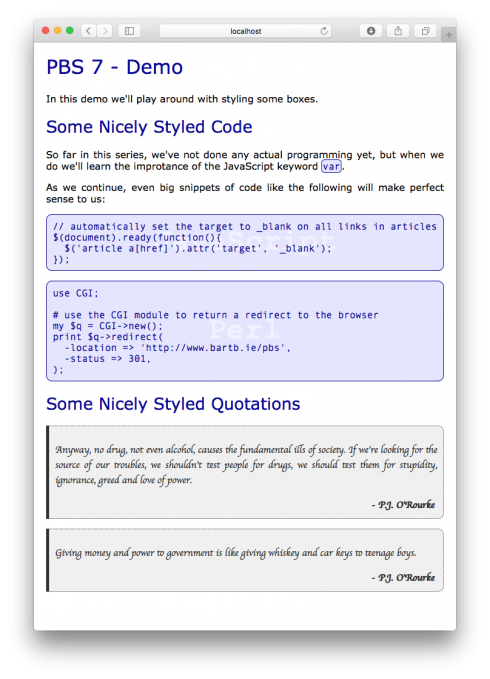 For completeness, the code for the HTML and CSS files is shown below:

Interrogating CSS Properties With The Browser

All modern browsers, even Microsoft’s new Edge, now include developer tools that can be used to interrogate a web page and get the active CSS properties for any given tag, and, to see the details of every box on the page. In Safari, you need to enable the developer tools in the Advanced tab of the preferences window:

Because FireFox is cross-platform, that’s the one we’ll demo in this series, but like I say, all modern browsers have the ability to do the same kinds of things, just in slightly different ways. 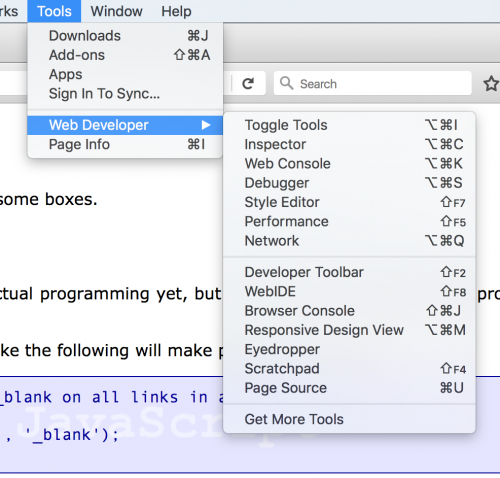 For today, what we want is the web inspector (Tools, Web Developer, Inspector): 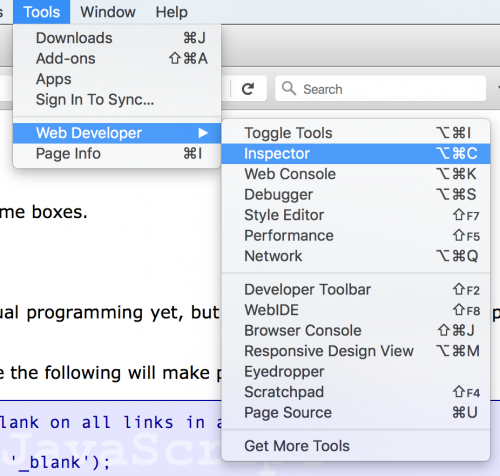 This will add a new interface to the bottom of the browser window with two panes – one showing the HTML tags in the document, and one showing info about the currently selected tag. To see a tag’s box, just hover over it in the right pane. To see its properties, click on it. In the left pane, where the properties are shown, there are tabs to control what properties you see. The two that are of interest to us at the moment are Rules, which show all the CSS definitions in our stylesheets that apply to the selected tag, and Computed, which shows the rules that have been applied to the tag when all the cascading of styles and calculations of specificity have been done. 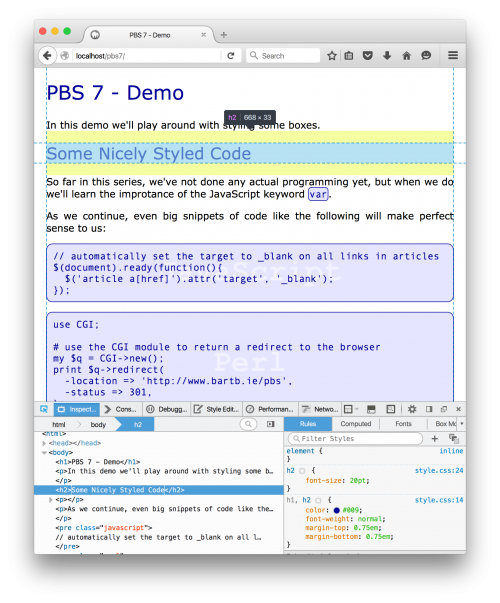 This interface makes it much easier to debug your CSS, and will become even more valuable in the next instalment when we look at using CSS to position elements within a page.