In this first instalment back after our month-long hiatus we change tack completely, moving away from JavaScript altogether, and diving right back into HTML and CSS.

One of the golden rules of programming is not to waste your time needlessly reinventing the wheel. This is the driving motivation behind the development of many open source libraries. The aim is to give programmers a leg up by providing prebuilt foundations for them to build on. The best example of this approach we’ve seen so far in this series is jQuery. Today, I’m going to introduce you to another one, Bootstrap.

Out of the box, all versions of HTML, even HTML 5, have some significant shortcomings:

Bootstrap aims to solve all these shortcomings using a combination of mostly CSS combined with a little JavaScript.

Getting Started with Bootstrap 4

We’ll be using the fourth incarnation of the Bootstrap API, Bootstrap 4. Bootstrap’s full feature set depends on two additional open source JavaScript libraries — one we’ve had plenty of experience with, jQuery, and one we’ve not encountered before, popper.js.

For now, this is all we have to do to start using Bootstrap 4:

For now, you can use this as a template for HTML pages that use Bootstrap:

We met what we called the CSS box model way back in instalment 7, but we really should have called it the default CSS box model.

To understand why there is more than one box model, let’s go back in time to the very earliest days of CSS. Back then there was no W3C facilitating web standards. Each browser manufacturer did their own thing and tried to convert their way of doing things into a de-facto standard through ubiquity. In the grand scheme of things the manufacturers agreed on far more than they disagreed on, but when it comes to CSS, there was a fundamental disagreement that caused no end of pain for developers — Microsoft’s box model was different to everyone else’s!

Mozilla and the other smaller players in the market used what has now become the default box model — the padding, border, and margin are external to the width (and height) of an HTML element. That is to say, the CSS width property refers to the width of the content area, not including any of the blank space around it. When you think about it, this is not logical! For example, a paragraph with a width of 300px, a padding of 10px and a border-width of 1px would appear on screen as a box that’s 322px wide (from outside border edge to outside border edge)!

Microsoft did things differently. In older versions of IE, the border and padding were internal to the width. So regardless of the padding or border thickness, a paragraph with a width of 300px would always be rendered as a 300px wide box. The content area would simply shrink and grow as you altered the padding and border widths.

Initially, the W3C threw away the old IE-style box model completely, but in CSS 3 they added it back in as an alternative to the default box model. CSS 3 introduced the box-sizing CSS property for selecting the box model to be used for each element on a page. Rather than allowing users to choose between just the Netscape and IE approaches, they also added a third option where the padding is internal to the width, but the border is external to it.

The three valid values for the box-sizing CSS property are:

Why am I telling you all this? Simple, because Bootstrap changes the default box-sizing for all elements from content-box to border-box. In other words, Bootstrap changes your page from the counterintuitive Netscape box model to the much more sensible IE box model.

For the most part, you should think of Bootstrap as a prewritten collection of CSS classes. Philosophically, Bootstrap separates these classes into four distinct categories. These categories define the structure of the official Bootstrap documentation:

At this stage of our coding journey I expect you not to be intimidated by links to official documentation. I’m not going to be spending countless hours recreating the excellent Bootstrap docs. Instead, I’ll be linking to the relevant sections of the official docs.

You can find the documentation at https://getbootstrap.com/docs/4.0/.

The most important four buttons for navigating the documentation are the ones matching the four main categories of CSS classes listed above. This is where you’ll find them: 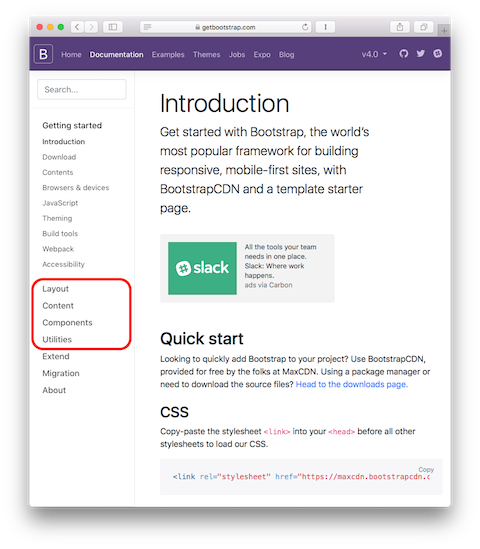 In the early days of our JavaScript journey, it was great to have somewhere to just enter some code snippets and run them without needing to set up a full web page. The same basic premise holds true here — we want to be able to quickly test out snippets of HTML with Bootstrap 4 classes without needing to create entire pages. For JavaScript I created a custom playground so there would be no extraneous features to add confusion. We’re much further into the series now. So this time I’m recommending a commonly used existing playground — www.bootply.com/new.

This playground provides three text areas, two small ones for JavaScript and CSS, and a big one for HTML. For now, we’ll only be using the HTML one. When you’ve entered your HTML with Bootstrap CSS classes, you can see what it looks like by pressing the run button in the upper left and looking at the preview at the bottom of the page.

I know Bootstrap is an API rather than a language, but still, I think it’s time for the traditional Hello World! 🙂

Enter the following into the HTML area in the playground:

To see what this looks like, press the Run button in the upper left: 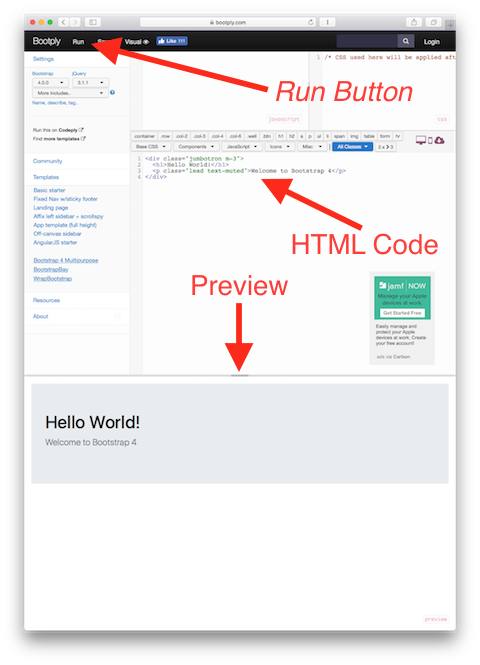 Initially, until we learn about Bootstrap’s layout functionality, we’ll need to wrap our code snippets with the following:

To make things simple, I’ve saved this template to Bootly.com at www.bootply.com/JcxTTJWslw.

Start by creating a regular HTML 5 web page that does not include Bootstrap and add a recipe for the dish or drink of your choice to it. Your recipe must have the following:

Feel free to add more elements to your recipe, but do not add any CSS or JavaScript, keep this as a plain HTML 5 page. Load it in a browser and note how ugly it looks by default.

Now include Bootstrap 4 into the page by adding the needed <link> and <meta> tags to the page’s <head> section and notice how much better your recipe looks already!

All we’ve done today is set the scene. Bootstrap is a very big API, so it’s going to take us quite some time to explore. Next time we’ll start out exploration with a look at some of the utility classes Bootstrap offers.