Up until now we’ve only encountered very simplistic HTML tags, and we have ignored the fact that many HTML tags can specify attributes. In this instalment we’ll look at two tags that require attributes – those for inserting images into pages, and those for inserting links into pages. Before we can look at the two tags in question, we need to lay two pieces of ground-work – we need to discuss attributes in HTML tags, and we need to discuss URLs, and particularly the difference between relative and absolute URLs.

HTML is the HyperText Markup Language, so what makes text hyper? The answer is links. A text document has a beginning, middle, and end, while a collection of hypertext does not. Hyper text contains jumping off points where you can leap from one piece of text to another; in other words, hypertext is linked. There is no beginning, middle, or end of the world wide web – it’s just a collection of web pages that link to each other. Reading a news article that contains a link to a wikipedia article that contains links to related terms is what hypertext is all about.

The thing is – in order to link someone to something, you have to have a way of addressing it. Within our computer we use our local file system to address files. If you say that your essay is in C:\My Files\My Important Essay.txt, or /Users/bart/Documents/My Important Essay.txt, there can be no doubt where that is on your computer. The world wide web does not exist within a single computer though; so a different addressing scheme had to be devised, one that extends beyond any single computer, and allows data to be addressed anywhere on the world wide web.

The solution was the Uniform Resource Locator, or URL.

A so-called absolute URL is a complete URL, and it specifies a number of parts:

All these parts are composed into a URL as follows – the underlined sections are placeholders, and the bold sections are required for valid absolute URLs:

So, the shortest valid absolute URL would look something like:

This breaks down as:

We could add a file path of myFolder/myFile.html as follows:

And we could add a fragment name of section1 as follows:

The data within URLs can only contain a small set of very basic characters: digits, unaccented characters, dashes, dots, and underscores. Other characters can be specified, but they have to be URL encoded – that is to say, replaced with a percentage sign followed by a two-digit hexadecimal code. When using the UTF-8 character encoding (the default in HTML 5, and the encoding used in this series) some single special characters are replaced with multiple hex groupings. You’ll find a good list of the encodings here.

The encoding for the space character is %20, but because it’s so common, the URL specification allows for a simpler shortcut – spaces in URLs can be encoded simply as +. In other words, the following two URLs are equivalent:

URL encoding is required in the path, query string, and fragment components of a URL.

Every web server is free to interpret the path part of a URL in any way it wishes. In this series, the recommended server software suite is MAMP, and the A in MAMP is for Apache. In other words, if you are following along using the suggested setup, you are using an Apache web server; so paths will be interpreted in the default Apache way.

Apache interprets the path part of URLs as a file path relative to its configured document root folder.

If the path part of a URL maps to a folder rather than a file within the document root, Apache looks for a so-called index file within that folder, and uses that to represent the folder. Apache will search through an ordered list of special file names to find an index file, and use the first one it finds. If none of the special files exist within the folder, Apache will return some simple HTML representing a listing of the files in the folder.

The default Apache config included in MAMP specifies just two special filenames to try – index.html first, then index.php. This is why we have been calling our sample files index.html in all our instalments.

Most web servers behave in a similar way by default, though the exact list of default index file names varies. Many servers will also include index.htm for example.

If all URL specifications were absolute, they would need to be changed each time a HTML file moved from one web server to another, or even from one folder to another. This would make things very difficult for web programmers, and make portable HTML code impossible.

A HTML tag attribute has a name and a value. Only officially defined attribute names should be used. The values should meet the requirements defined in the specification. Some attributes can have any arbitrary value, including no value at all, while others must contain a URL, or a number, or some other specific type of information.

Attributes are specified within opening and void tags only. They go after the name of the tag, and the name and value are separated by an = character. The value must be contained within a pair of " characters. Tags can specify multiple attributes.

The generic form of a tag with two attributes would be:

The tag for inserting an image into a HTML page is <img />. This is a void tag, and requires a number of attributes.

So far we have encountered block-level tags like paragraphs and headers, and inline tags like emphasis and code. Most tags fall neatly into one of these two categories, but there are a few oddball tags that don’t – the <img /> tag is one of these oddballs. It’s a so-called inline-block tag. Images are effectively treated like giant characters, and inserted into the document accordingly.

Using CSS, it is possible to make images behave in different ways. So we’ll revisit the positioning of images in a future instalment.

<img /> tags require two attributes, and there is a third optional one that I also want to mention:

src
The URL of the image to include (can be relative or absolute)
alt
Alternative text describing this image. This is the text that will replace the image in text-only browsers and screen readers for the visually impaired. The attribute is not technically required, but leaving it out is exceptionally bad form; so consider it required. Also, be sure to always use useful alt text – ‘logo’ is useless alt text. ‘Podfeet Logo’ is useful alt text.
title
This optional attribute can be used to specify text that should be displayed as a tooltip when the user hovers their mouse over the image. This is not the same thing as alt text. It exists to allow extra info for users be specified, not to tell screen readers what the image is. All images should have alt text, but only images need titles.

A web browser cannot know how big an image will be until it has been downloaded. This means that, when it’s rendering the page, it doesn’t know how big or small a gap to allow for it. That means the browser has to guess, and then reflow all the content on the page when it knows how big the image really is. This is inefficient.

You can help the browser by telling it what size the image will be within the <img /> tag. This is done using the width and height attributes, the value of which must be positive integers representing the appropriate dimension in pixels.

In the past, when our bandwidth and CPU power were much much lower, the use of width and height attributes was very important. Users would notice real speed improvements on websites that used them compared to websites that didn’t. Now that most of us have really fast internet access, and now that our CPUs are so much more powerful, the use of these attributes no longer has a noticeable effect on page load times in most real world scenarios.

The width and height attributes can also be used to scale an image. If an image is actually 300 pixels across, you can render it half-size by specifying a width of 150. If you only specify one dimension, images are scaled proportionally, but if you specify both, they are stretched to fit into the defined rectangle.

Be very careful about scaling images in this way – it’s very bandwidth inefficient. If you have a massive 5MB image, and you show it as a small thumbnail by specifying a small width and/or height, you are wasting a lot of bandwidth. In general it’s better to create small versions of images using an image editing app rather than scaling images with the width and height attributes.

Because image files are required to make this example work, I’ve created a zip file containing both the HTML file and the referenced images. You can download it here or here on GitHub, and then place the three files contained in the zip file into a folder called pbs5a in your web server’s document root folder.

For simplicity I’m also including the content of index.html here:

Once the files are in place, and your web server is started, you should be able to view the page at the URL http://localhost/pbs5a/, and it should look something like: 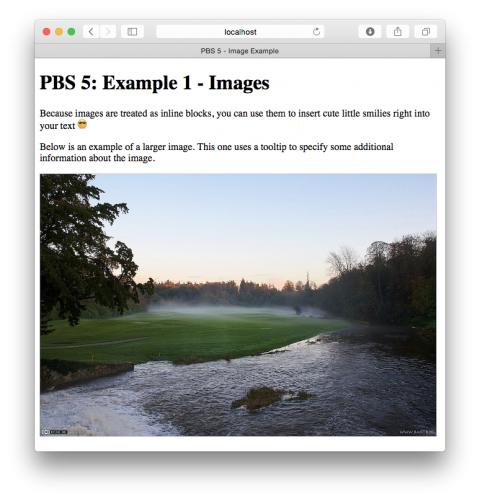 Rather confusingly, the same tag is used to define named fragments within a page, and to create links to other URLs. Even more confusingly, the tag is the <a> tag. In this case a stands for anchor, but that’s not actually much help!

The attributes specified determine whether a specific instance of the <a> tag is defining a named fragment or a link.

The basic form of a link looks like this:

It’s also possible to request that the browser open the link in a new window using the attribute and value target="_blank". Exactly what will happen when this kind of link is clicked is determined by the browser. Modern browsers tend to open such links in new tabs.

Optionally URLs can specify a named location within a page to jump to. This is known as a URL fragment, and is specified at the end of the URL with the # character. This is useful in very large documents with many sections. These fragments are also known as anchors, hence the name of the <a> tag.

Anchors are created using the <a> tag with the name attribute. When creating anchors, the <a> tag usually has no content, but because it is not a void tag, it must still be written with a closing tag.

To define a URL fragment with the name section1 you would add the following tag into the document just before the header for section 1:

Again, because the example involves multiple documents, I have zipped the files up and you can download them from here or here on GitHub. Extract the zip and copy the two files it contains to a folder called pbs5b in your web server’s document root.

For convenience, the contents of the two HTML files is included here:

We have now covered the basics of HTML. We can create documents with properly marked up content, correctly marking sections of text as headings, paragraphs, lists, etc.. We are now ready learn about using CSS to style our documents.

Once we’ve learned the basics of CSS, we’ll be revisiting HTML to learn about some more tags we’ve ignored for now. The reason we’ve ignored these tags on our first pass through HTML is that their usefulness is not obvious until you know about CSS.