As our branching strategy has evolved it’s sprouted ever more simultaneously edited branches. The more branches under active development, the greater the chances of merge conflicts. Up to this point I’ve been very careful with how I’ve structured the examples to avoid conflicts, but in this instalment I’ve done the opposite, and intentionally engineered the example to create a conflict which we can then resolve!

Listen along to this instalment on episode 668 of the Chit Chat Across the Pond Podcast.

If you’d like to play along with the examples you’ll need to download this instalment’s ZIP file and unzip it. Open a terminal and change to the folder into which you extracted the ZIP . You’ll find a file in there named pbs110a.bundle, this is a bundled version of the repository we created in the previous instalment, with some additional commits added to prepare the ground for a merge conflict. We’ll look at these commits in detail later.

Like we did in the previous two instalments, we need to make a new repository and import all the branches and tags from the bundle. We’ll name our new repository pbs110a. To create this new repo we’ll take the following steps:

The commands to do all this are

A Quick Recap on Merging Branches

If you want to avoid errors, be sure your working copy is clean before you try to merge.

As we’ve seen already, Git does a good job of automatically merging changes, but, that’s not always possible. When the same line is edited on both branches some form of human judgement is needed to figure out what to keep, what to discard, or, how to merge the two versions into some sort of unified new whole.

When Git hits a conflict it asks its human masters for help! Git will pause the merge and mark the affected file(s) as being conflicted. At that point a human has to look at each conflict, resolve it, and then tell Git to continue with the merge.

There is also the run away option — you can reverse the conflicted merge and get back to a clean working directory just like it was before the doomed merge was started!

If you open index.html in our newly restored pbs110a repo in both your browser and favourite text editor you’ll see that there have been two changes on the main branch since the end of the previous instalment:

The paragraph of text on the main branch states:

This is correct but not complete, since Bootstrap 4 uses both jQuery & Popper.js, the paragraph really should mention that, so, there’s a fix for this sitting in a branch named fix_missingOS. Let’s check that out and have a look:

On this branch the paragraph correctly states:

Simultaneous to this bug fix I also added a new feature to the page — a Bootstrap alert to show the age of the PBS series. The age is calculated using the Moment.js open source library. The work for this new feature is on the new branch feat_seriesAge. Let’s check that branch out and have a look: 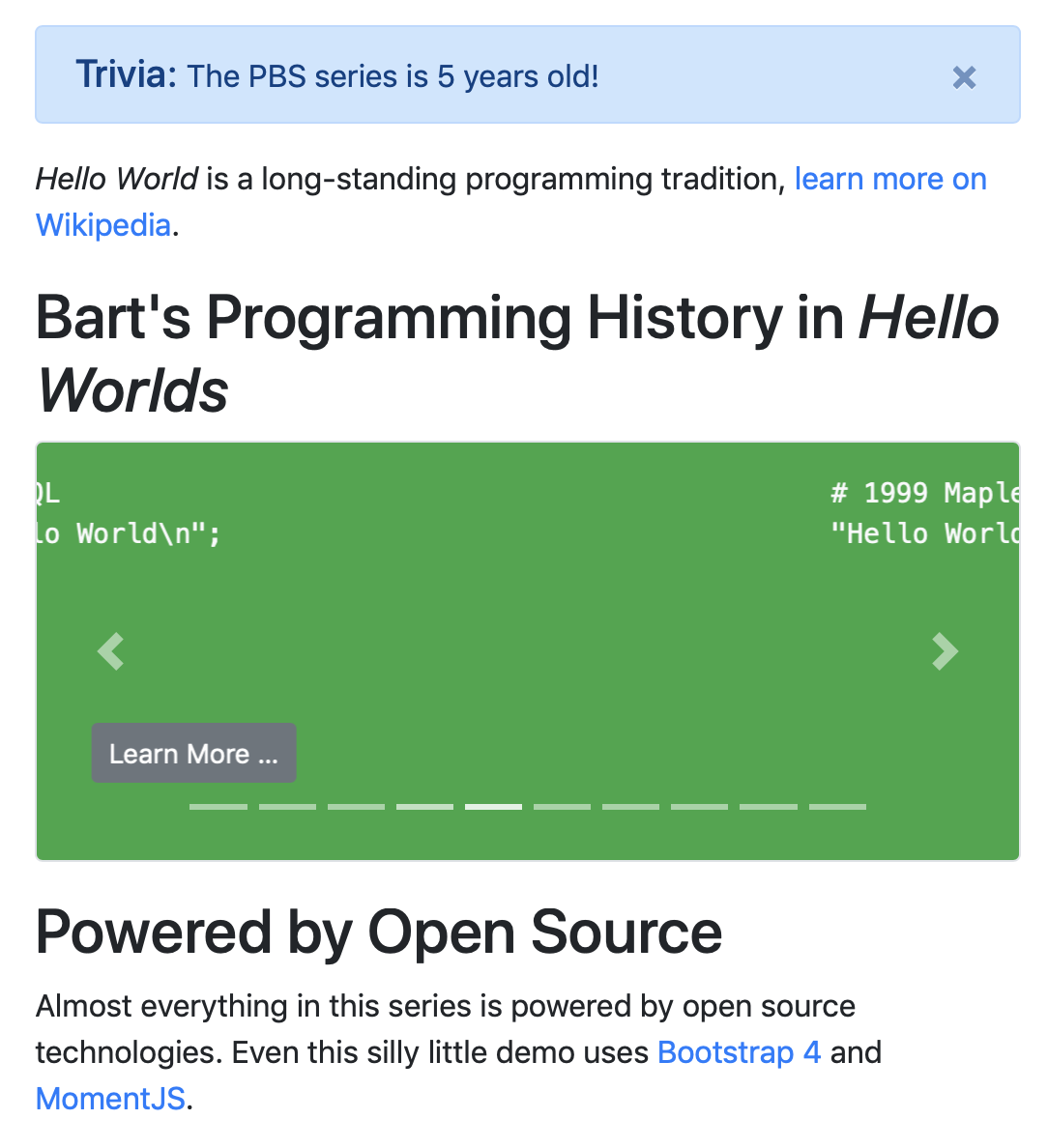 The alert shows that as I type this the series is about 5 years old, but that’s not the only change on the page. Moment.js is an open source project, so the paragraph about open source has also been updated to read:

Almost everything in this series is powered by open source technologies. Even this silly little demo uses Bootstrap 4 and MomentJS.

Let’s take a moment to understand where we are before we try to merge these two branches into main one after the other.

Both the fix and feature branch branched off main when the open source paragraph only referenced Bootstrap. This same line of text has been edited on both branches, and now we need to bring both changes into main.

This is how GitKraken diagrams the repository at this point:

The fix is nice and easy, so I finished that before I finished the feature, so in the real world I would have merged it first, so let’s do that now.

For completeness I’m going to tag the merged commit with a new version number following the SemVer convention described in the previous instalment. Note that since the merging change is a fix, and the current version is 2.4.0, the new version will be 2.4.1. Again, for completeness, I’ll also delete the now obsolete fix branch. Finally, remember that you need to be on the branch you wish to merge into, so we need to start by switching back to main:

As you can see, Git was able to merge these changes automatically, so no conflict, and because there had been no commit on main between the branching point for the fix_missingOS branch and the merge point, Git chose a fast-forward merge.

Now let’s try merge the feature branch. Again, we’ll clean up after ourselves, and, we’ll tag with a new version number. Since this is a new feature rather than a fix, the version number will go from 2.4.1 to 2.5.0. Finally, since we want to merge into main, and since we’re already on main, we don’t need to do another checkout before we merge:

As expected (and planned), we have a merge conflict in index.html. Note that the terminal output very clearly tells you that there’s a conflict, and which file or files are conflicted.

The repository has now entered a special state, the merge has started, but not completed, so the working copy is in a kind of limbo between the before and after universes. We now need to work through each conflict and resolve it before we can complete the merge and move beyond this limbo state back into a clean working copy. There’s no limit on how long your repository can stay in this state. If you were merging a huge change in a massive project you might have hundreds of conflicts to resolve, so you could spend weeks in this state!

You can see that you are in this conflict state at any time with the git status command:

The way Git tells us that we’re in the conflicted limbo state is by saying we have unmerged paths. The same terminology is used as the heading for the list of files that have conflicts, in this case it’s a list of one, index.html.

GUI apps can choose to be very explicit in how they show a conflicted state. As an example, this is how GitKraken currently shows the repo: 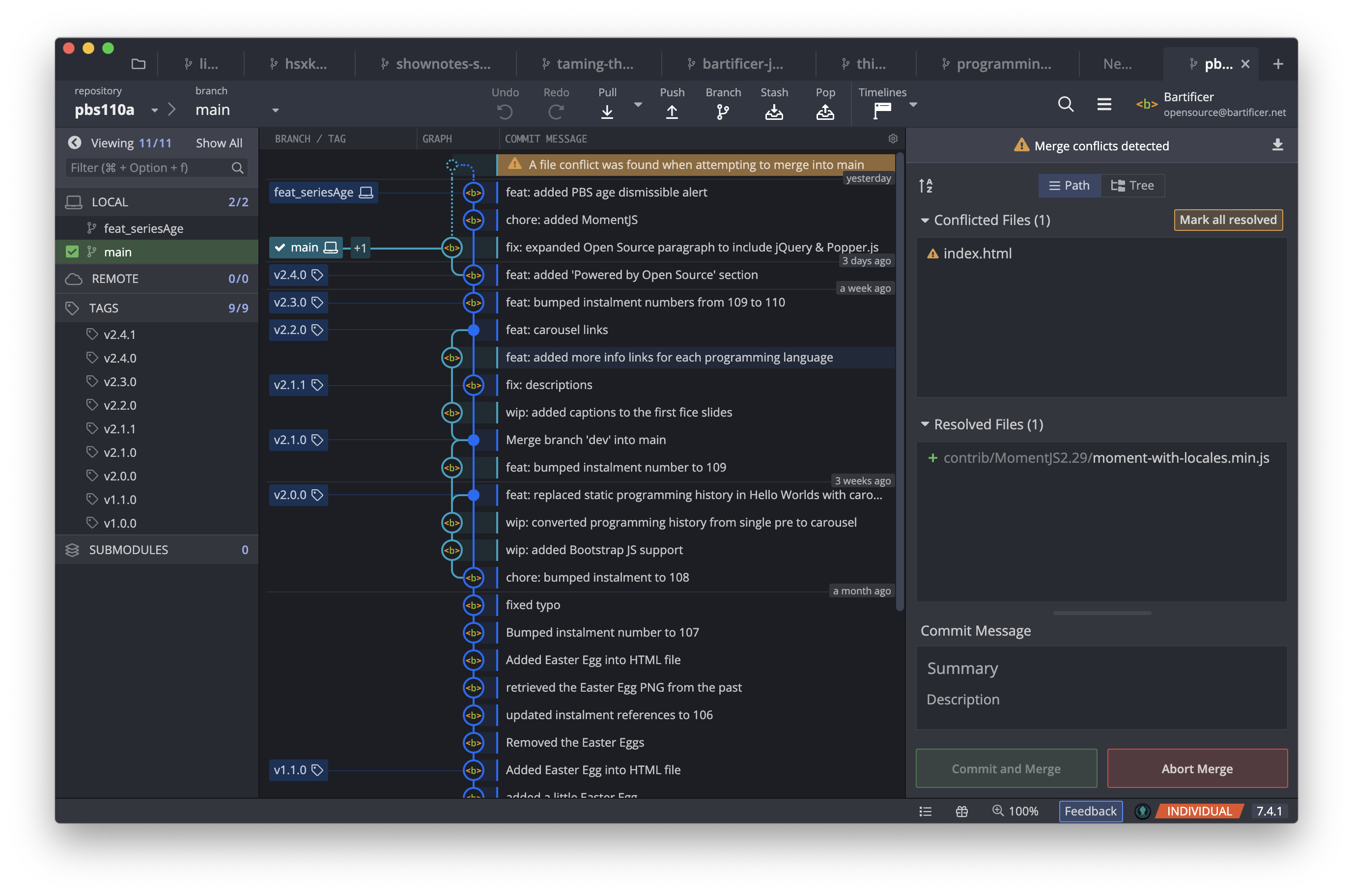 Notice the exclamation point and orange banner to draw your attention to the conflict. Also notice that the partially completed merge is show on the timeline as a dashed line. Finally, notice that what would normally be the button to stage changes has now become a button to Mark as Resolved, and the commit button has split in two, become a button to Commit and Merge, and one to Abort Merge.

Notice that the output from git status very conveniently tells us how to abort a conflicted merge — ‘use “git merge –abort” to abort the merge’.

It’s important to remember how easy it is to run away, so let’s do that and abort the merge:

No fanfare, not even any output, it’s simply as if the merge was never even attempted! The git status command shows all is normal again:

OK, so now that we know how easy it is to back out at any time, let’s try actually resolve this conflict! Let’s start by attempting the merge again, and getting back into our limbo state:

We now know there’s a conflict in index.html, how are we supposed to resolve it?

What Git has done is put both versions of the conflicted section (or sections) into the working copy of the file, but delimited them with special lines of text.

The start of a conflicted region is marked with:

After this special line the version of the conflicted section from the branch being merged into is included.

Next Git inserts a divider line:

After the divider the version of the conflicted section from the branch being merged, feat_seriesAge in this case, is included.

Finally, Git marks the end of the conflicted section with another special line of the form:

Note that’s the name of the branch being merged at the end of the line, so it will change each time.

Git-aware code editors can detect these conflict markers and add enhanced UI of their own around them. This is how the conflicted section looks in VS Code:

Our task is simple, replace that entire conflicted section, including the special lines with the content we want to go into the merged commit.

In our case we need to write a single sentence that encapsulates the information in both versions, so you should open index.html in your favourite editor and replace:

We now need to tell Git that we’ve resolved this conflict, we do that by staging the file like we would any changed file (with git add):

If we do a fresh git status we can see that we’re still in our limbo state, but all the conflicts are now resolved:

The conflict warnings have also vanished in GitKraken: 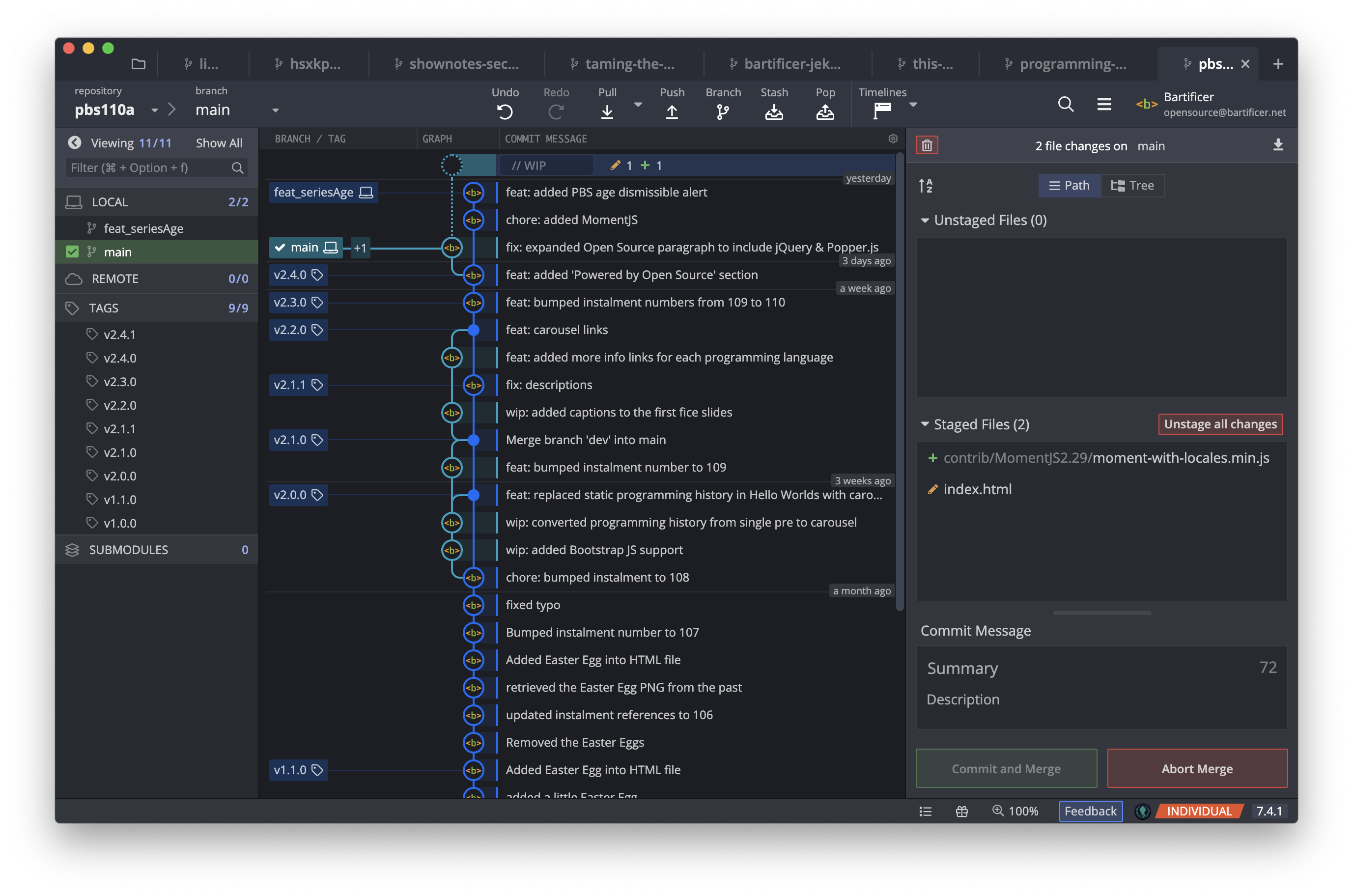 Like Git kindly tells us, we can now use git commit to complete the merge:

Next we can tag our new release and delete our obsolete branch:

That’s all there is to it, we’ve now successfully navigated one of those dreaded merge conflicts!

We can see that all’s normal on the terminal:

And in GitKraken we can visually see that the branches have been successfully merged:

Hopefully this instalment has cured you of any fear you may have had of merge conflicts. It turns out they’re easy to back out of, or, to resolve, which ever you wish.

Something you may have noticed in recent instalments is my regular use of the word before while describing things you should do. Things like “before you start making your changes, create a new feature or fix branch”, “don’t forget to checkout the right branch before adding new files”, “remember you have to have a clean working copy before you can merge” … and so on. These befores require we humans to remember things, and we humans are terrible at that! It’s inevitable that as you use Git you’ll forget one of these befores and start making edits in the wrong place. I do it all the time, and so will you! Thankfully, Git provides a mechanism for dealing with these situations — stashes, and we’ll learn about those in the next instalment.

We don’t normally do Palate Cleansers in Programming By Stealth but Scott Hanselman did a lovely video on TikTok about how it’s ok to feel like an imposter when you’re programming:

@shanselman on TikTok on #impostersyndrome